Great. Four more bags of nameless filth for the taxpayer to support in prison. A three-year old girl is dead. And what do these sewer-rats get? A laughably short "sentence" of "rehabilitation" from which they will be out on bail before you can say "Jack Robinson". It's time for the government to set an example, and for justice to be done. As if the Coral Burrows case didn't sicken you enough, we now have four "whanau" or family in on a horrific and systematic torture and finally murder of a helpless, innocent little child who was in their care.

Bring back the death penalty. These lowlife deserve nothing better than life-time hard labour, or more ideally, 20,000 volts through their system and then bury them in cheap coffins made from pinus-radiata.

How many more little children need to be brutally murdered and molested?
How many more stupid, unworkable pieces of legislation that do more harm than good need to be pushed upon everyday New Zealanders?
How many more beurocrats such as Cindy Kiro and Sue Bradford do we need telling us that "smacking escelates into child abuse"?

The following excellent article on such a terrible event is from this website. 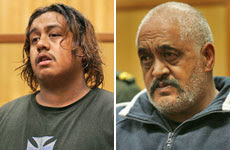 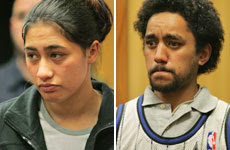 Nia Glassie's step-grandfather allegedly wrapped a scarf twice around her neck, then lifted her off the ground and strangled her with it until she turned purple.
After 10 seconds, he is said to have thrown her to the ground and verbally abused her when she cried.
These were among new details of the abuse allegedly suffered by the 3-year-old revealed yesterday.
They surfaced at a bail hearing for three of the five people accused of abusing the toddler.
All three were denied bail amid a heavy police, media and family presence in the Rotorua District Court.
Judge Chris McGuire said part of the reason he refused bail was because the trio and the victim came from the same family, and there was a risk of interference with witnesses.
"For now, the victim herself, Nia Glassie, is silent forever from giving her own views. It does seem to me that child victims may on occasions like this deserve a voice beyond the immediate family."
Nia died in the Starship hospital last Friday after eight days in a coma with head and abdominal injuries. Her cousin, Michael Pearson, 19, and 17-year-old Oriwa Kemp, who is the partner of Nia's stepfather's brother, were first to apply for bail.It is alleged that they and Nia's stepfather, Wiremu Curtis, 17, and his brother, Michael Curtis, 21, assaulted Nia.
Judge McGuire said the four were allegedly responsible for "a series of events of cruelty and hurt to a very young child" which included Nia being "locked in a clothes dryer and the clothes dryer turned on".
He said two children were witnesses and had provided evidence to police but he suppressed their identity to protect their privacy. A neighbour had also seen Nia picked up by a leg and thrown at the clothesline by the group.
She was allegedly spun from the line by her ankle until she fell off and was also seen running around on the roof of the house while the adults looked up and laughed.

There was also an allegation she was left at her kohanga reo in a filthy state and smelling of cannabis. (WHY DIDNT THEY REPORT THIS FACT?) The judge remanded the two in custody until a pre-depositions hearing on September 27. Pearson consented but Kemp - who kept her face to the ground for most of the 90-minute hearing - did not and the judge ordered her to reappear on Tuesday. He also denied bail to William Curtis, 47, Nia's step-grandfather, who is charged with assaulting her and injuring her with intent to cause grievous bodily harm.Curtis' alleged offending relates to an earlier period and police say that, unlike the other four, he is not likely to face further charges.The allegations that he abused Nia were made by his daughter, who said he would walk up to Nia and push her on to the ground or into the wall, had slapped her face and threatened to stomp on her head.Gasps could be heard in court as Judge McGuire related the incident with the scarf, saying it had led to the grievous bodily harm charge. Curtis consented to be remanded in custody for a predepositions hearing on September 27.A bail hearing for Michael Curtis will be held next Wednesday. Wiremu Curtis is due in Auckland District Court on Monday.

Thanks Andy for your great items displayed here i have placed a link back to you from my website..thanks again and I will now keep checking in..I have posted 2 awful child brutality pictures up from the ones the Judge released to the media..we need to make people more aware about the true depths these depraved animals will go to satisfy their drug induced foul tempers >http://cindykiro.blogspot.com/
Don B

Being viewed by members of the public as filth is probably why they felt isolated and ostracized from society in the first place. I view them as people that have done wrong things and are now paying the price for what they've done. If they ever get out of prison, they're likely to go back in again if they're not given a chance to succeed. Their behaviour tells me that they do not currently feel enough pride and have enough self-esteem to behave in a civilized manner. It's a bad situation all-around, isn't it?

How much pride do you think it takes for a person to have the common-sense not to throw a defenceless three year old girl at a clothesline?

How much self-esteem is required for a person to realise that spinning a little child around on a clothesline by her ankle until she falls off, or putting her in the clothes dryer and turning it on - is unthinkable?

Too many people, including our Government are sided with the criminal. To heck with the victim goes the mentality, what are we going to do to help out the perpetrator?

"Rehabilitate" them. Rubbish. What our country needs is justice. Set an example of these low-down mongrels as a deterrent to future would-be child-abusers.

And then, I do see what you're saying, it is often a vicious downward spiral. Sympathy, however, is the last thing that these four murderers need.

Anonymous' statement that these animals are looked on as filth seems strange to me..They almost to a man live in filth..but I myself would describe them as People who receive welfare payments-people who have access to welfare help agencies-people who have access to employment-people who have access to free health care-people who have access to free schooling for their children? Of the above they choose just the one service(welfare payments) They choose to drink-have drugs-cars-keep their children home from school-Their mother chose to leave this child with these drunken- cannibus smoking Whanau to baby sit. The mother herself was offered a safe home by her mother (who runs a strict household)but refused.This dead child's mother at the age of 32 started a relationship with a minor of 15yrs of age. I am not saying this family had it easy...But lets not make too many excuses for their actions..Thats part of the problem..In one sentence..its drugs-drink-lazyness-and lack of so called Whanau love.
The politicians are still calling it society's problem?..a great way of taking the heat off.I for one wont wear that one.