Today outside The Warehouse in Howick a team of two concerned citizens manned a table. A few kilometers down the road another table was kept busy with Craig Hill of Unity for Liberty raking in the signatures and hearing from citizens who were outraged at the repeal of Section59. Craig reported that 450 signatures had been gathered today by his team in Howick.

From their position outside the warehouse the other team of two hardly had time to take a breath with people coming up to the table in an almost constant stream. Andy Moore reported that at least ten young people (about 14 or 15 years old) had to be turned away as they were not eligible to sign. Several young people who had only just turned eighteen, or would turn eighteen before the September 08 election were also eager to put their name to the petition calling for a Referendum on the anti-smacking debate.

One kind lady after signing headed off and brought back a couple of sausages from the sausage sizzle which was operating down near Pak'n Save. Two bottles of V were knocked back by one of the team members, Andy Moore - who also commented that he felt like he needed a third bottle. While initially starting off in the traditional "stand in front of the table" Auckland style, the Southerner soon suggested a change to the Christchurch method, and this was eventually seen to be a viable alternative.

After the day's efforts (9:30 am start, 5:00pm finish), the team shot across the road for a feed before heading back home. 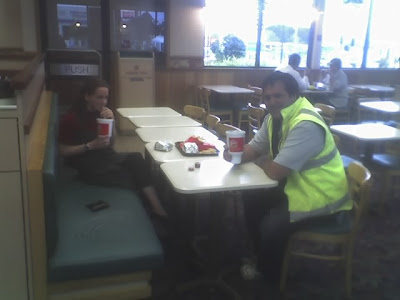 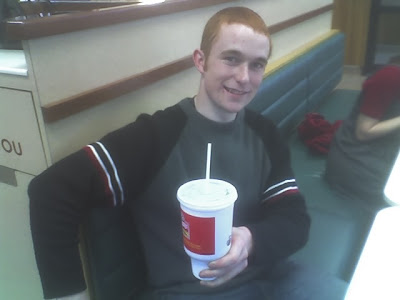 Wendy's medium Coke. Took me the best part of an hour to demolish.
Posted by Andy at 9:04 PM No comments:

Abolish the Death penalty? How about Abortion?

yet another excellent article from www.whaleoil.co.nz

Helen Clark and her government are behind efforts at the UN to abolish the death penalty. She said;

She just as easily could have said "Abortion is the ultimate form of cruel, inhuman and degrading treatment. Abortion violates the right to life and is by definition and in practice a cruel and degrading treatment. It is always inflicted on the innocent. Its very nature means it cannot be reversed." Of course she didn't say that the but the arguments are more relevant for abortion than they are for the Death Penalty. In fact at least the assholes who are executed by and large deserved it having committed heinous crimes, babies on the other hand have committed nothing more than being an inconvenience to the potential mother.

How sanctimonious of Clark to be railing against the Death Penalty while the access to open abortions kills off thousands of potential Kiwi's per annum. We also see further sanctimonious claptrap when people wail on about the death of our babies after they are born when the sad reality is that those cases are little more than "very late term abortions". If a society says it is ok to kill your kids before it is born then the logical conclusion is that it is ok to kill them after they are born. In that way Abortion is the ultimate in child abuse while Clark says that the Death Penalty is the ultimate for of cruel, inhuman and degrading treatment.

She make me sick

This lady reckons that she is walking from Cape Reinga to the steps of Parliment in support of Cindy Kiro's stepped up home-invasion regime. I commented on her blog...

The Government is interfering with many good families in New Zealand.  The repeal of Section9 means that even more families are going to be invaded and good, loving parents branded as child abusers.

Cindy Kiro has a bad, bad agenda as does Helen Clark and Sue Bradford.  They want to see children more as part of the state than as part of a caring, loving family.

By giving themselves more power in this anti-democratic way (passing the bill into law against the wishes of 83% of New Zealand), it is going to be the worse for children in New Zealand.

The child abusers aren't going to pay any attention to whatever new laws are being passed up in Wellington, they will continue to kill, abuse and molest innocent children.

Good parents know the difference between a smack and child abuse.  Believe me, I have spoken to many hundreds of such parents and they are outraged that their authority as parents has been undermined in this socialistic manner.

"A loving smack is not child abuse"
Posted by Andy at 4:54 PM No comments:

"I popped along yesterday to help Simeon and Gaylene drum up support for their petition for a referendum on the making it a criminal offence to smack children.

They've had their stand in Howick for the past few Saturdays and have drmmed up big support. Nine out of ten passer-bys were happy to sign and express their disgruntlement of the present law.

Gaylene was the runner-up in the ACT on Campus essay competition, Both her and and Simeon are very switched on and it was great to see them getting signatures and answering questions. They know their stuff."

Rodney is right when he says "Nine out of ten passer-bys were happy to sign and express their disgruntlement of the present law."  I put the ratio at closer to 95%, as the support for the petition is consistently overwhelming New Zealand wide.  On Friday when my sister and I ran a table in the center of Christchurch, we had three people who had something negative to say.  One lady walked past.  "Do you think parents should be allowed to smack their children?" she asked.  "Yes".  "At your age, you think that parents should be allowed to smack their children?".  "Yes".  She had no argument, only an astonishment that I held the same view that 83% of New Zealanders hold, that a smack is not child abuse.  Four Australian women started signing and were upset to learn that their signatures did not count.  An Australian family stopped at the table and the father expresed his support for the petition.  A number of young people came past wanting to sign, but learning that they were too young.

Check out www.unityforliberty.net.nz and get involved manning a table to collect signatures for the Referendum.